Majority in Sunni Islam considers Triple Talaaq (Divorce) in one instance as valid. Shia Islam considers it illegal (Haraam). Triple Talaq is when a Sunni husband divorces his wife by simply pronouncing the word ‘Talaaq/ Divorce’ three times in front of his wife, with or without intention to do so, with or without witnesses. In Shia Islam this form of Talaaq (Divorce) is illegal (Haraam). 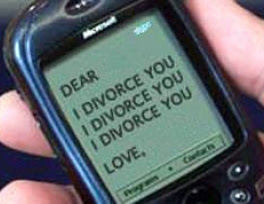 Such a Talaaq (Divorce) was a pagan Arab custom which was made forbidden by Prophet Mohammed upon his followers. However, Umar son of Khattab the second caliph later considered it valid during third year of his reign. Shia don’t recognize Umar Khattab as an authority in Islam, thus also, consider such validation by Umar Khattab as illegal.

Majority in Sunni Islam considers uttering word ‘Talaaq’ three times in a single instance to wife, regardless of intention, joke, anger, compulsion, haste, witnesses; by a husband as legal. For reunion with same husband such divorced wives need to observe waiting period (3 months) then undergo ‘Halaala’. ‘Halaala’ is an Islamic law which forbids reunion between divorced couple, before wife remarries another man and gets irrevocable divorce from the latter and observes waiting period (3 months).

Absence of witnesses, state of anger, being under compulsion, being drunk, done as joke are no excuse, and divorce gets executed in majority of Sunni jurisprudence; remorse felt by husband or both don’t make any revoke on divorce.

Shia Islam considers all divorces which were pronounced without intention, in compulsion, or as jokes etc as invalid, and does not amount to divorces. Shia Islam also does not allow divorce to be pronounced if husband has had sexual intercourse with his wife during that menstrual cycle.

Shia Islam considers divorce as legal but makes it difficult up to the required level, wherein grievances could be wiped out, anger could subside, and marriage and family could be saved. Irrevocable divorce in majority of Sunni Islam could happen in few seconds; where as in Shia Islam it requires minimum three menstrual cycles.

In case of marriage (Nikah) witnesses are not required in Shia Islam, it also allows temporary marriage (Mutah), and this makes Shia marriages easier as compared to Sunni marriages.

Interestingly, divorce in Shia Islam as it requires two witnesses in each instance and minimum three menstrual cycles for irrevocable divorces makes it difficult compared to divorce in majority of Sunni jurisprudence, where in divorce can happen in few seconds.

Prophet Mohammed had ordered to make marriages as simple as possible so that society remains free from sexual evils. Also, since divorce breaks family, period for reconciliation need to be provided on basis of Qur’anic injunction, both above advantages are seen in Shia Islam. Shia Islam is the Islam as preached by true deputies of Prophet Mohammed who are twelve Imams of Shia Islam.

Back to: Marriage and Divorce in Shia Islam

Oh Allah! Peace and Salutation be upon Mohammed and House-hold of Mohammed.
Posted by Mazher Shaikh at 05:19 10 comments:

In the year of farewell Hajj (10 Hijri) just after Hajj, when Prophet Mohammed was returning back to Madina, on his way to Madina, some distance away at Juhfa, Archangel Gabriel (Jibril) bought down the Divine orders to Prophet Mohammed so as to declare the following revelation of Holy Qur'an to people:

O Messenger, announce that which has been revealed to you from your Lord, and if you do not, then you have not conveyed His message. And Allah will protect you from the people. Indeed, Allah does not guide the disbelieving people.

After its revelation caravan entered the valley of Ghadeer Khum near Juhfa, Ghadeer Khum literally mean an oasis in archaic Arabic, thus the name. Here, afternoon prayers were offered. Prophet Mohammed asked people to make a pulpit near the oasis. A pulpit was made using saddles of camels and people swept the ground using date palm leaves, all arrangements were made. Prophet Mohammed delivered a heart touching speech and finally made Ali Murtada to stand beside him. He asked people: Do you know this man? They replied in boost: He is Ali son of Abu Talib. Prophet Mohammed began saying thus:

that is: Allah is my Maula (Patron), I am Maula of all faithfuls and to whom so ever I am Maula then Ali is their Maula!

He prayed in favour of Ali (as) and his supporters and stepped down from pulpit. Instantly, Umar son of Khattab (the later second Caliph) got up and congratulated Ali Murtada and said: Greetings O son of Abu Talib, this day you have been made Commander of faithfuls (Amir ul Mo'mineen). Umar Khattab and all others present there paid their oaths of allegiance at hands of Ali son of Abu Talib. Oath ceremony is reported to have continued for around three consecutive days.

Salman Farsi (Persian) a loyal companion of Prophet Mohammed and a staunch supporter of Ali Murtada is reported to have added the statements of wilaayah (divinely appointed leadership) of Ali Murtada in the next Azaan (call for the prayers), which to this day forms a convention in Shia Azaan. People instantly objected to this and reported it to Prophet Mohammed. Prophet Mohammed told them that just then he had exactly preached what Salman had announced in call for prayers, he asked them didn't they remember? These people silently went away. 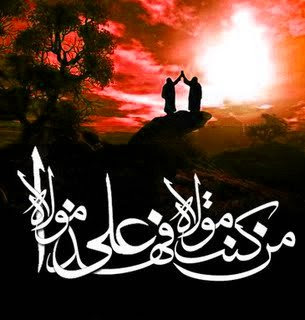 Points to be remembered: Allah asked Prophet Mohammed that if he didn't declared what was revealed it would imply he didn't convey any message of messengership of whole 23 years. It should be understood that now, if some one doesn't believe in this declaration it would imply the person didn't believed in any message from of 23 years.

Just after this event got over Archangel Gabriel bought Divine orders to declare the momentous revelation of Holy Qur'an, it forms the part of following verse:

This day I have perfected for you your religion and completed My favor upon you and have approved for you Islam as religion.

The day coincided with Solar Equinox (20th March), which is celebrated as Eid Nawroz (Ghadeer according to Solar calender).

Shia Muslims fast on day of Eid Ghadeer, ceremonial bath is taken, best clothes are worn, itr (scent) is applied. Sweets are eaten when possible. Houses are decorated with lights and festivities,  candles are also lighted.

Social gathering are arranged for religious lectures, eulogy ceremonies. Lavish family and social feast, dinner and lunch parties are arranged. Shia Islam preaches to spend this day in celebration, any sorrows are tried to be neglected on this day. Celebrative processions are undertaken. Eid Ghadeer is considered most auspicious day in Shia Islam.

Oh Allah! Peace and Salutation be upon Mohammed and House-hold of Mohammed.

Posted by Mazher Shaikh at 01:54 No comments: